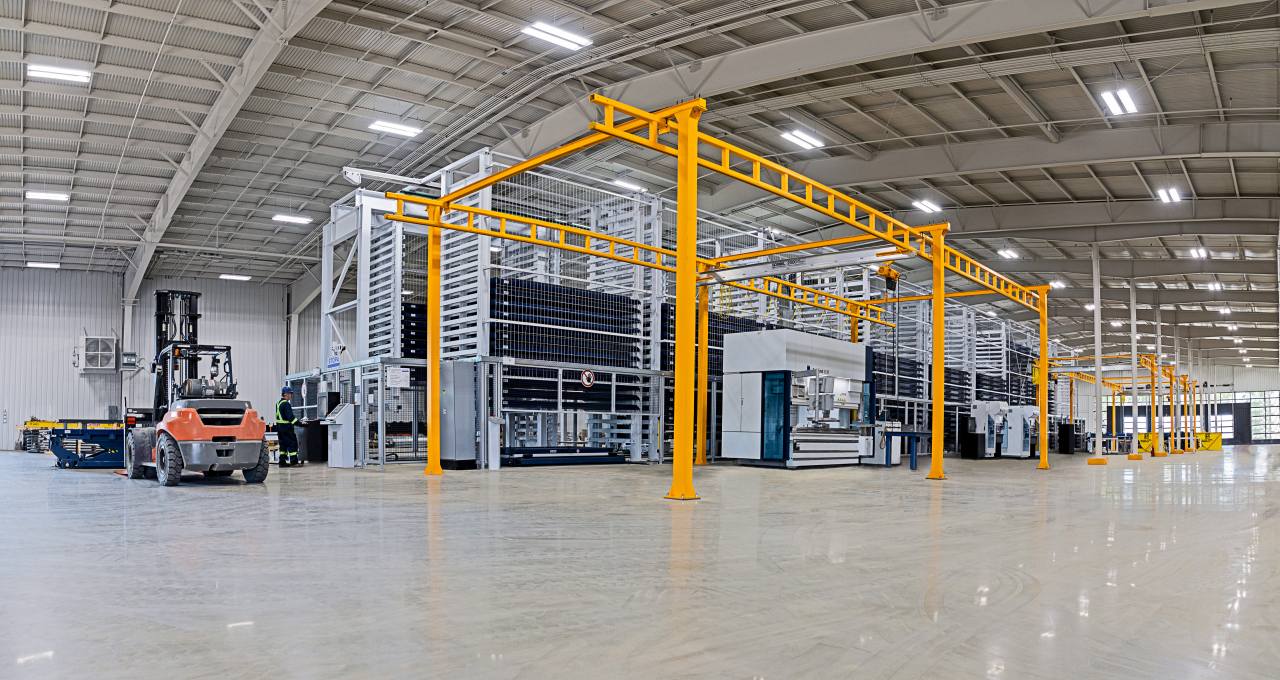 So much for humble beginnings.

The Brandt Group of Companies dove head-first into advanced technology, the likes of which have never been experienced in this corner of the globe.

The Regina-based industrial manufacturer now boasts Western Canada’s largest fully automated smart factory, decked out with state-of-the-art machinery new to this part of the country and with unique capabilities that impress its new handlers.

“It’s like night and day from when I first started (at Brandt) in terms of growth and complexity,” explained Dan Bonnet, P.Eng., engineering manager for Brandt Engineering Products. “What we have here now is pretty special.”

Going back three or four years, automation at Brandt meant what it could provide to its customers for automated systems. Internally, it started looking at automation by bringing in robotic welders. Bonnet said this smart factory is “the next generation for us.”

“Rather than us providing automation for our customers, this is our big step to automate ourselves and to improve efficiencies and safety.”

Expanding its reach into custom manufacturing for rail, mining, construction and pipe industries, in addition to its roots in agriculture, the new smart factory was critical for the company in terms of reducing costs, increasing quality and keeping pace with its competitors.

Located on Brandt’s lot in north Regina, the smart factory is considered state of the art both in terms of the technology and machinery found inside and for what it is capable of doing.

There are three 10-kilowatt fibre lasers all connected to an 18-tower storage system that houses 375 storage locations. Two of the lasers are connected to a manual sorting station, while the third laser employs a fully automated sorter to pick and stack parts.

The wattage of the machines also is unique, as is the speed at which it can cut through steel.

This new equipment has a lot more cutting power, plus it’s easier on the environment. Its energy consumption is about one-third what the older technology was, meaning lasers can last a lot longer between service intervals.

The older lasers required an advanced overhaul approximately every 2,000 hours, which can be expensive.

Additionally, the system has a capacity to hold more than four million pounds of plate inventory, with every pound of that steel accessible by automation.

The new facility is also home to two of three new press brakes.

“This is a fully automated storage and retrieval system that does all material handlings for you,” explained Darren Borstmayer, P.Eng., Brandt’s director of plant design. “There are other systems similar to this, but nothing compares to this magnitude.”

“We didn’t used to have the capacity to cut sheets for plates. Now, we’re at the stage where we have three lasers automated and connected.”

Material is parked in a storage system before it’s pulled out automatically. It can be tracked and traced once it leaves the storage system.

Once the size of the cut is determined, the system will bring down that piece of steel and automatically feed the laser system. The laser will do the cut. The system will then pick the cut parts for the sheet and place them onto a pallet. A separate system will pull that pallet back into storage.

“The entire operation is a sequence of events … like a chain,” Bonnet said. “Every link in that chain has to do its share to make sure we can get to that goal of running it unattended. It has been a steep learning curve for us and we’re still on that curve.”

To ensure Brandt had state-of-the-art capacity to support the industry, it reached out to Trumpf GmbH + Co., a leading German industrial machine manufacturing specialist, to provide machine tools, laser technology and electronics for the new smart factory.

From there, it was all hands on deck when it came time for assembling the parts.

Brandt called upon engineers from various departments – civil, structural, mechanical, plant design and IT engineers all played a role in piecing the machinery together.

According to Trumpf, up to 90 per cent of service-related activities can be solved remotely. This means service technicians are not required.

Plus, the facility its aesthetically appealing.

“You walk into that plant and there’s bright, shiny floors and tons natural light. The last thing you’re thinking is this is an industrial plant that is cranking out tons of steel every day,” Borstmayer said. “It would be quite different than the typical steel-cutting plant that you are used to seeing.”

“If you try to manually load and unload sheets (of steel) these days, you’re going to lose capacity,” explained Chris Dornstauder, P.Eng., manufacturing engineer at Brandt. “Within 30 seconds, we can change from one sheet or a certain thickness or cut to the beginning of the next one. We can keep up with the lasers and their speed.

“We made sure we would have capacity for ourselves, too. We wanted to be able to supply ourselves with our growth. With our rapid growth over the years, we needed something. It doesn’t matter if we’re cutting for us or for an outside customer, we can switch, we can mix, we do whatever we need to do to make sure everybody gets what they need. And we can do that in a hurry.”

Faster but not careless. The connectivity of components was a game changer.

Prior to the new automated system, staff would manually program tooling pieces for certain jobs, meaning operators may not be using the same tooling from part to part.

“You could never quite get consistency. But now that we’re doing it online, we can make the programs, we can guarantee the features are going to be what they’re supposed to be,” Bortsmayer said. “The pressbreaks have laser-controlled angles so we can guarantee repeatability of angles. That’s a leap forward, for sure.”

When it comes to safety for staff, the less interaction humans have with tens of thousands of pounds of body-crushing steel plates, the better.

“With automation in the past, safety was a major concern,” Dornstauder said. “We have this system that is holding millions of pounds of steel and shuffling and moving it around. But employees aren’t tasked with having to take care of that now. The machines are doing that for you.”

The technology allows technicians to service the equipment without having to shut down the systems. The laser is completely enclosed and the subsequent fumes and dust particles from cuts are extracted.

“What we have now are the building blocks to allow us to move forward,” Bonnet said of the smart factory. “Five to 10 years from now, we’re still going to be building on this. This is the base and we can build it from here.”

“It’s like moving from checkers to chess,” Borstmayer said. “There’s a lot more at play. You have to be thinking ahead and you have to make sure you’re making the right moves.

“There are a lot of provisions for a future state. We designed a lot of options to make use of more automated sorting and robotic implementation. The technology is changing at such a rapid pace that it won’t be too long before the next steps are feasible and useful to us.”