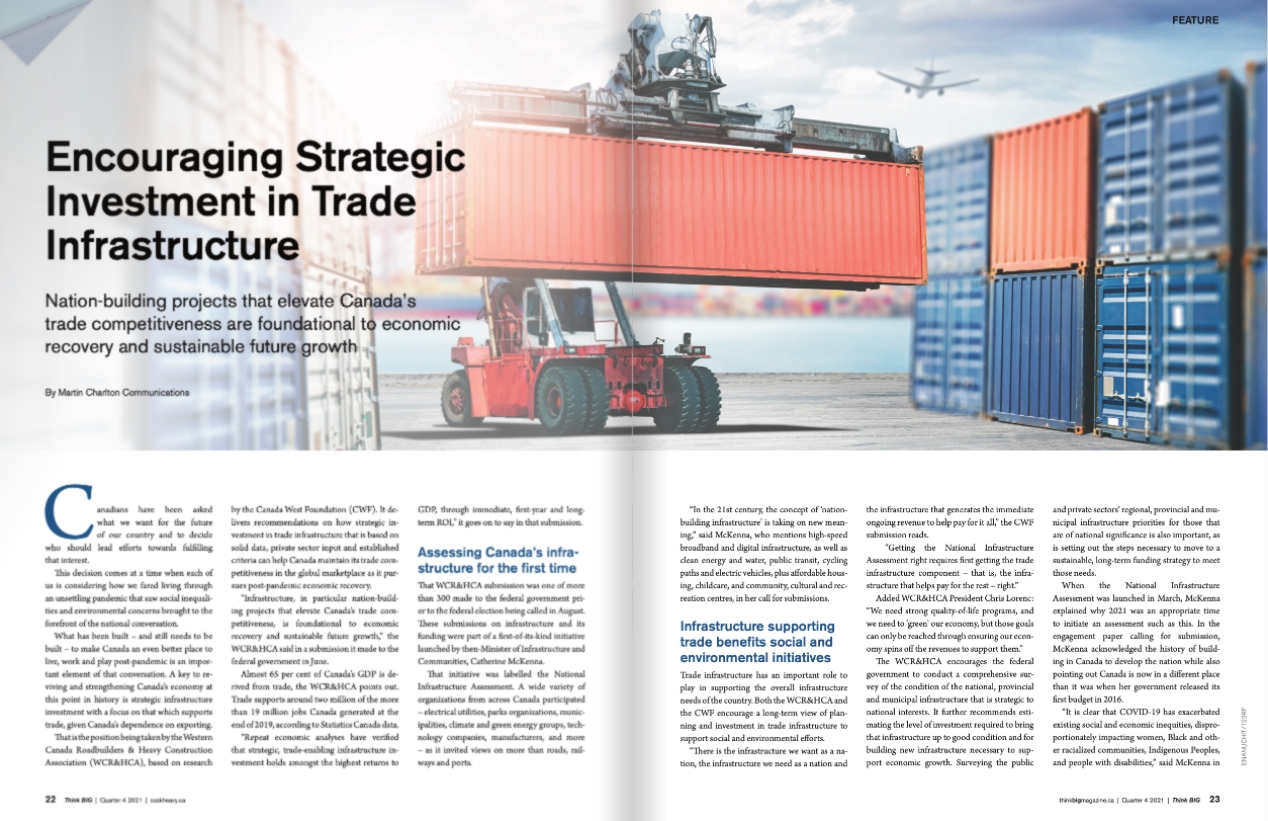 Canadians have been asked what we want for the future of our country and to decide who is the best option to lead efforts towards fulfilling that interest.

This decision comes at a time when each of us is considering how we fared living through an unsettling pandemic that saw social inequalities and environmental concerns brought to the forefront of the national conversation.

What has been built and still needs to be built to make Canada an even better place to live, work and play post-COVID is an important element of that conversation. A key to reviving and strengthening Canada’s economy at this point in history is strategic infrastructure investment with a focus on that which supports trade, given Canada’s dependence on exporting.

That is the position being taken by the Western Canada Roadbuilders & Heavy Construction Association (WCR&HCA) with based on research by the Canada West Foundation (CWF) providing recommendations on how strategic investment in trade infrastructure that is based on solid data, private sector input and established criteria can help Canada maintain its trade competitiveness in the global marketplace as it pursues post-COVID economic recovery.

“Infrastructure, in particular nation-building projects that elevate Canada’s trade competitiveness, is foundational to economic recovery and sustainable future growth,” the WCR&HCA said in a submission it made to the federal government in June.

Almost 65 per cent of Canada’s GDP is derived from trade, the WCR&HCA points out. Trade supports around two million of the more than 19 million jobs Canada had at the end of 2019, according to Statistics Canada data.

“Repeat economic analyses have verified that strategic, trade-enabling infrastructure investment holds amongst the highest returns to GDP, through immediate, first-year and long-term ROI,” it goes on to say in that submission.

That initiative was labelled the National Infrastructure Assessment. A wide variety of organizations from across Canada participated – electrical utilities, parks organizations, municipalities, climate and green energy groups, technology companies, manufacturers, and more – as it invited views on more than roads, railways and ports.

“In the 21st century, the concept of “nation-building infrastructure” is taking on new meaning,” said McKenna, who mentions high-speed broadband and digital infrastructure, as well as clean energy and water, public transit, cycling paths, and electric vehicles plus affordable housing, childcare, and community, cultural and recreation centres, in her call for submissions.

“We need strong quality-of-life programs, and we need to “green” our economy, but those goals can only be reached through ensuring our economy spins off the revenues to support them,” said WCR&HCA President Chris Lorenc.

The WCR&HCA encourages the federal government to conduct a comprehensive survey of the condition of the national, provincial and municipal infrastructure that is strategic to national interest. It further recommends estimating the level of investment required to bring that infrastructure up to good condition and for building new infrastructure necessary to support economic growth. Surveying the public and private sector’s regional, provincial and municipal infrastructure priorities for those that are of national significance is also important as is setting out the steps necessary to move to a sustainable, long-term funding strategy to meet those needs.

When the National Infrastructure Assessment was launched in March, McKenna explained why 2021 was an appropriate time to initiate an assessment such as this. In the engagement paper calling for submission, McKenna acknowledged the history of building in Canada to develop the nation while also pointing out Canada is now in a different place than it was when her government released its first budget in 2016.

“It is clear that COVID-19 has exacerbated existing social and economic inequities, disproportionately impacting women, Black and other racialized communities, Indigenous Peoples, and people with disabilities,” said McKenna in her foreword in Building the Canada We Want in 2050 Engagement Paper on the National Infrastructure Assessment.

“That is why when we build back better, it is even more important to address these inequities by investing in key areas including childcare, affordable housing, public transit and high-speed broadband.”

“Further, Canada is in a competitive global race at a time of a rapidly changing climate, digital transformation, changing demographics, and shifting geopolitics,” McKenna goes on to state.

“Countries with next-generation infrastructure will be outsized winners at this critical movement of transformative change.”

Learning from other nations

Countries such as Australia, the U.K. and China have a strong lead on Canada in terms of strategic, evidence-based, long-term infrastructure investment.

Carlo Dade, the Director of The Trade and Investment Centre at CWF, sees this first-of-its-kind effort at a federal level as a long overdue, but welcome development.

Dade has been advocating for Canada to adopt best practices developed by other countries years ago in order to protect Canada’s global reputation as an exporter. He says Canada can learn from its competitors as well as its customers.

He points to Infrastructure Australia, that country’s independent infrastructure advisor established in 2008. It is governed by legislation that defines its role and responsibilities in guiding nationally significant investment and reform.

“What we see in our competitors, like Australia, are these permanent public-private structures that can take a long-term view that don’t lose knowledge, that can follow issues over decades, which matches the timelines for identifying, designing, building and operating these assets,” said Dade.

Then, there are Canada’s export customers. While the U.S. is Canada’s primary trade partner, Western Canada relies heavily on exporting to Asian markets. Economic superpowers, such as China, have a governing structure that differs from Canada that won’t approve of episodic funding of infrastructure.

“We have a set of economic actors that can take long-term views who are our major customers and competitors,” said Dade.

“We’ve got to be thinking about realigning our economic governance structures with those of our largest customers, who are growing.”

If Canada does not move to long-term infrastructure investment planning, Dade says these customers could continue to lose confidence in Canada’s ability to deliver as an exporter.

Looking decades ahead when planning investment

A long-term view requires a different perspective on picking projects to receive funding – one that extends beyond the election cycle. The return on investing in a major road will not be realized by the time an election rolls around, making it a challenge to get politicians to recognize the importance of long-term funding.

“You have a political cycle and an election cycle that is diametrically opposed and actually harmful to long-term funding models,” said Dade.

The CWF points to the timelines of United Kingdom’s National Infrastructure Commission, an arm’s length organization like Infrastructure Australia. It uses a 30-year planning horizon and then, every five years, formally updates its national infrastructure plan.

“Best practice qualifies prospective projects on the basis of evidence-based proposals, qualifying them against criteria of national significance and demonstrating lasting value over the long-term,” the CWF submission reads.

“It protects us from the political nature of any government,” said Dade. “That is a discipline on the political spending on any money.”

While it can reduce perceptions that some regions are being supported for political benefit, it also helps ensure a modern and comprehensive take on thinking about what types of infrastructure will generate a return on investment.

“The old thinking to build more rails to get more hopper cars to ports is not the reality of modern trade infrastructure,” said Dade.

“You are talking the movement of goods, yes, but you are also talking about the movement of people and money and ideas and services. All of these are components of the modern economy and all need attention.”

Criteria of national significance and evidence to support that a project meets the criteria would result in different asset types in different sectors of the economy getting attention and would help determine what projects will generate returns and have benefits for other sectors. This would move funding towards “shovel-worthy” projects as opposed to the “shovel-ready” projects governments have been funding.

Collecting data that can be used to demonstrate the economic benefit of infrastructure projects and their funding has been an issue for Canada as well. Most G20 countries (excluding Canada and the U.S.) and a number of developing nations as well as Inter-American Development Bank and World Bank have tools to collect data and do modelling regarding infrastructure. This allows them to take longer-term views of issues and determine how their efforts link with neighbouring economies. He also points to the need for the private sector’s input to be appropriately and effectively collected and used to support decision making.

“We need better information. We are still not collecting basic data,” said Dade, who explained that academics at universities are doing some of that work. But he sees a better scenario in having that data collection and modelling done by an independent body similar to Infrastructure Australia or the United Kingdom’s National Infrastructure Commission.

Keeping interest alive beyond the election

That point was noted by McKenna in a report issued in response to the submissions received.

In late July, just days before the election call, she released a report distilling the recommendations received in the hundreds of submissions. Many of the points made by the WCR&HCA and CWF seemed to be addressed in this report, Building Pathways to 2050: Moving Forward on the National Infrastructure Assessment.

The report said many submissions noted there is a “need for an independent, non-partisan and credible advisory body” with a clear mandate that can produce the data and analysis needed to identify infrastructure needs and priorities that align with strategic priorities and looks at investment decisions over a 30-year period.

The report also mentions the role an infrastructure assessment can play in Canada’s future, regardless of the outcome of the Sept. 20 election.

“It is a critical time to build a more prosperous, inclusive and resilient Canada,” said McKenna in her foreword in that July report.

“We aim to get there by working together, using the best available data, guided by global best practices in infrastructure planning, investment, design, and management, and leveraging private sector investment to go further and build back better than we ever could alone.”

“The Assessment will play a key role in guiding governments of various political stripes along the way.”

Dade encourages all voters concerned about infrastructure investment to contact candidates during elections as well as the offices of those elected. This contact will help them recognize there is interest among the electorate in the importance of strategic investment in trade infrastructure.

Continuing to bring forward this concern to politicians will further establish there is a desire to see infrastructure recognized as a priority and that projects get chosen for investment based on solid data, private sector input and established criteria to ensure Canada maintains its trade competitiveness in the global marketplace.