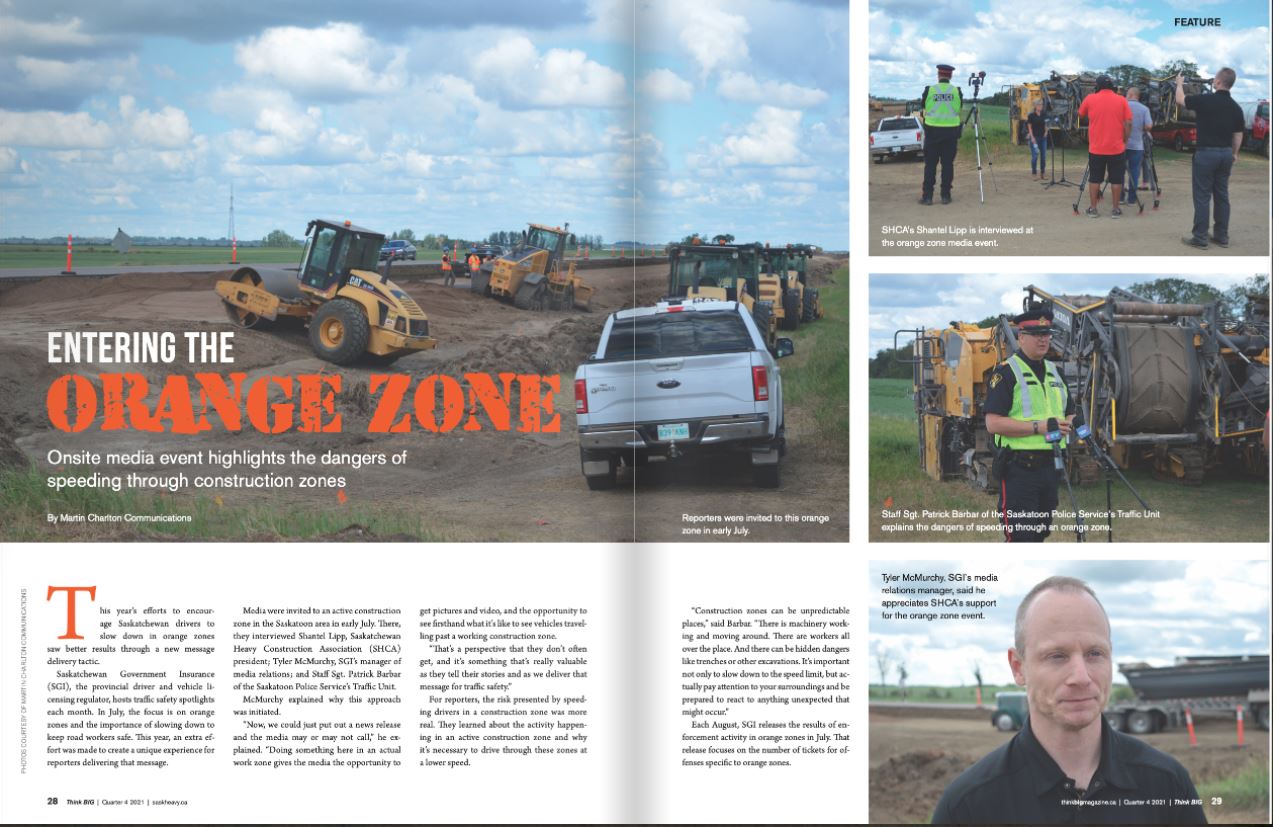 This year’s efforts to have Saskatchewan drivers recognize the necessity of slowing down in orange zones saw better results with a new tactic being used to deliver that message to the public.

SGI hosts traffic safety spotlights each month with July being designated as the one highlighting orange zones and the importance of slowing down to keep workers in those zones safe. This year, an extra effort was made to create an experience for reporters delivering that message and story.

Reporters were invited to an active construction zone in the Saskatoon area in early July. There, they got to interview Saskatchewan Heavy Construction Association president, Shantel Lipp, SGI’s Manager of Media Relations, Tyler McMurchy, as well as Staff Sgt. Patrick Barbar of the Saskatoon Police Service’s Traffic Unit.

McMurchy explained why this approach was taken.

“Now we could just put out a news release and the media may or may not call,” said McMurchy.

“That’s a perspective that they don’t often get and it’s something that’s really valuable as they tell their stories and as we deliver that message for traffic safety.”

It made it more real to reporters the risk speeding drivers present to workers and helped them recognize everything going on in an active construction zone that makes it necessary to drive through these zones at a lower speed.

“There is machinery working and moving around. There are workers all over the place. And there can be hidden dangers like trenches or other excavations. It’s important not only to slow down to the speed limit, but actually pay attention to your surroundings and be prepared to react to anything unexpected that might occur.”

Each August, SGI releases the results of enforcement activity in orange zones in July. That release focusses on the number of tickets for offenses specific to orange zones.

This year, there were 71 tickets issued roadside by police officers. That’s the lowest number given out since 2016.

However, despite a decrease in tickets, there were still some incidents over the summer. One notable one was recorded on video by Allan Barilla, the general manager at Morsky Construction and a director on the Saskatchewan Heavy Construction Association’s board.

In late July, Barilla was overseeing a 13-kilometre stretch of roadwork on the eastbound lanes of Highway 16 between Denholm and Maymont, northwest of Saskatoon.

He told CTV News and CBC News that on that Monday afternoon, he had already called the RCMP to report a driver in a white truck who was trying to pass the line of cars in a closed lane.

Then, his crew members working at the start of that orange zone radioed him to warn of another driver in a red car speeding past the lineup of vehicles.

“They estimate he was doing about 140 kilometers an hour,” said Barilla. “He went through four of the cones … and they saw those go flying in the air.”

The driver allegedly weaved in and out of traffic, ran over cones and hit the ditch a couple of times.

“He not only passed in the closed-off lanes … sometimes he was trying to pass on the grass on their left side, whatever pavement he could have plus grass,” said Barilla.

Once this driver got to the end of the orange zone, a cone got stuck under this car. He tried to dislodge it by swerving, but lost control and headed across the median into oncoming traffic.

“He was going down the wrong side of the westbound, and then he finally hit some vehicles and ended up flipping over in the ditch on the north side,” said Barilla.

“The young driver came within feet of nearly hitting at least 10 of our employees,” said Lipp. Barilla said two members of his crew could not hear the radio calls and that they could have been hit had the one crew member not forgotten her tape measure off to the side. The sound of the car hitting a cone just before reaching their location also alerted them.

“He was endangering every other driver on the road. It’s unfortunate that this was not the only example of someone speeding or driving unsafely in a construction area that month,” said Lipp.

Following an investigation, RCMP charged a 21-year-old from North Battleford with several offenses, including impaired driving, dangerous operation of a vehicle and prohibited driving. He was to appear in a Saskatoon court on Sept. 1.

While this example was extreme, the danger presented by drivers choosing to drive faster than the posted speed limit is real every time it happens. In 2020, there were 101 collisions in orange zones around the province, resulting in 35 injuries and one death.

While 71 tickets are better than previous year’s numbers, it is still not low enough.

“Our work isn’t done until we get that number down to zero,” said Lipp.

“The Saskatchewan Heavy Construction Association will continue working with SGI and our partners to make sure our workers stay safe.”

That approach is what Barbar believes is necessary to continue to address this issue.

“For any traffic safety issue, there’s not no one stakeholder has the solution on their own. So, the police can’t be the end all be all to the issue,” he said.

“We need to work closely with all our partners including the construction industry, SGI, and highway transport in order to achieve the goal of making these construction zones as safe as possible.”

McMurchy appreciates the opportunity for SGI to work with the Saskatchewan Heavy Construction Association to make a difference.

“The folks at the Saskatchewan Heavy Construction Association were always so willing to find these opportunities, find these scenes for us to hold these media events. I know it has been something that the media has appreciated as well.”