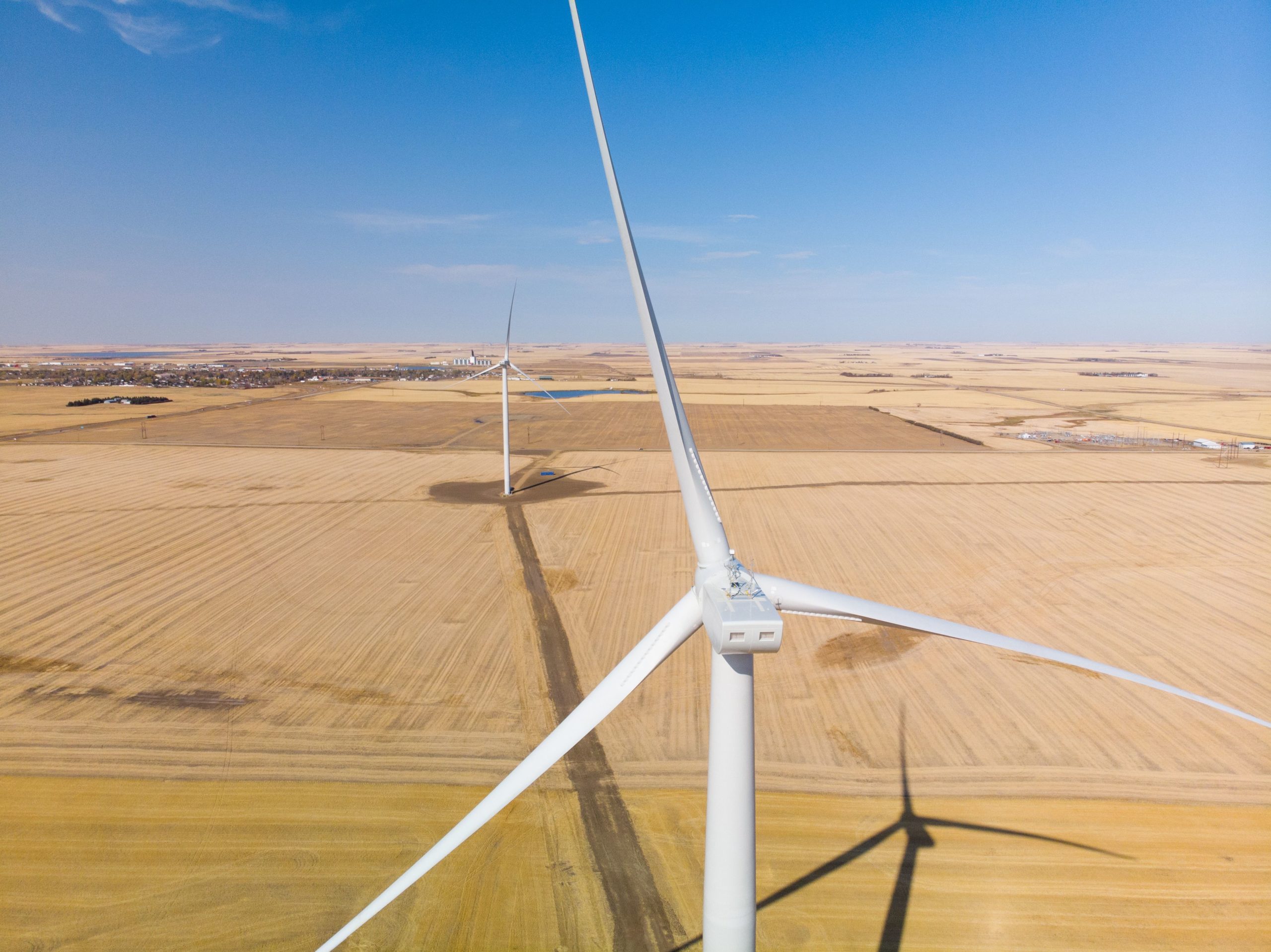 How will SaskPower achieve its goal of reducing greenhouse gas emissions?

The answer may be blowing in the wind.

With dozens of renewable energy projects – wind power and solar power – in the construction phase, SaskPower is making significant strides towards a cleaner future.

Currently, SaskPower has approximately 240 megawatts of wind generation on its system. Plus, it’s in the process of building another 385 megawatts of wind power through contracts awarded to independent power producers (IPP).

By the end of 2023, SaskPower anticipates nearly tripling the amount of wind generation. By the end of 2023-24, it hopes to have one of the highest amounts of wind power percentage-wise in power generation of any province in Canada.

“We’re taking some pretty significant steps to update our electricity system so that it doesn’t have the greenhouse gas intensity that it has today or had in the past,” explained Mark Peters, P.Eng., SaskPower’s Director of IPP Development at SaskPower.

SaskPower is working to develop solar generation options and looking at smaller projects. It is in the middle of adding 40 megawatts of solar power at four different projects across the province. Through other programs, it is adding another 30 to 40 megawatts and aims to be close to 80 megawatts of solar in the next two to three years.

“Our customers are expecting us to move in that direction,” Peters said. “And I think we are doing the right things in a responsible and cost-effective way.”

SaskPower emissions decreased in 2019 compared to the year previous year. Moving towards 2030, it plans to start replacing conventional coal with low or zero emissions power sources like wind and solar.

Saskatchewan has six wind power facilities operating in the province, with its power capacity from wind pegged at about five per cent.

“Wind has come down in price and it’s to the point where it is starting to make good business sense. It is a cost-effective way of producing power,” Peters explained. “Solar power still has a way to go. The cost of solar may be twice the price of wind, but it’s continuing to come down. I suspect solar will get there eventually.”

With wind and solar power generation being emission-free, there is no carbon tax attached to them.

That’s not to say that wind and solar power generation aren’t without their challenges – the biggest one being that both rely on Mother Nature, meaning they can’t be controlled or provide ongoing, reliable power on their own.

“How do we integrate an intermittent type of generation like wind or solar that fluctuates quite a bit from hour to hour and then layer on top of that the demand for electricity?” Peters asked.

“You need generation you can rely on to meet the demand, while at the same time compensate for the fact that wind is fluctuating up and down. It’s difficult enough to match generation with load. But then layer in a generation type that you can’t control. That becomes a more complex problem to solve. It’s another variable that we need to solve to deliver electricity in a reliable fashion.”

“On the coldest and darkest day in January you want something you can turn on. Therein lies one of the challenges we have in Saskatchewan. You have to have some kind of a backup generation to meet demand.”

It’s no secret that southwestern Saskatchewan is considerably windier than elsewhere in the province. That’s where there’s an abundance of fuel in terms of wind power.

But dotting the landscape along the Saskatchewan-Alberta border with dozens of wind turbines isn’t as simple as it sounds.

The facility is home to 83 wind turbines built on 7,500 acres of land. Each turbine is capable of producing 1.8 megawatts of power when there is sufficient wind. The turbines get their full power at wind speeds of 50 kilometres per hour. But they’ll run when wind speeds are between 15 and 90 km/h.

Peters was involved with this project. He recalls the variables that went into finding the most ideal location. SaskPower considered the best spot from a wind perspective, from a transmission perspective, and accessibility to the site, in addition to finding willing landowners and minimizing the environmental footprint.

Peters noted there is now a very mature and competitive market for the development of wind power projects by the private sector.

“Because we’re engaged in the development of wind by the private sector now … they bid into the process,” Peters said. “We select which is the best value by assessing a number of things, including interconnection costs.”

“The competition drives the ideal location in terms of pricing, community engagement, Indigenous participation and environmental impact. We allow the marketplace to prepare proposals and then evaluate the proponent proposals for each site to find the best location.”

Here’s a brief snapshot of the wind and solar generation projects SaskPower is developing over the next couple of years:

Located near Assiniboia, this project is currently under construction. It is expected to be online in March 2021 and produce up to 200 megawatts.

Located near Riverhurst, this facility is currently under construction and is expected to come online by the end of 2021. The three-turbine project will produce up to 10 megawatts.

Located east of Swift Current, Saturn is expected to break ground on this project in late 2020 and come online in September 2021. The 100-acre facility could produce up to 10 megawatts.

Located near Herbert, this facility is currently under construction and is expected to be operational by the end of September 2021 and produce up to 175 megawatts.

Located east of Regina, this project is in the early stages of development. It is expected to be online in September 2022 and produce up to 10 megawatts.