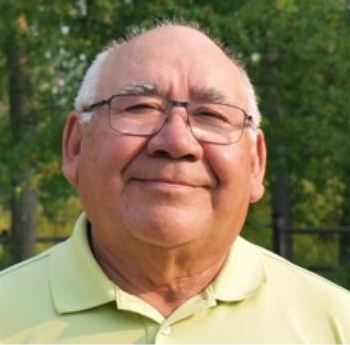 Harry Cook sees a lot of golf clubs and fishing rods in his future.

Now that he’s fully retired from his political ventures, Cook, who proudly sits on the SIEF board of directors, has more time to dedicate to two of his favourite pastimes – golfing and fishing.

“Everybody has plans. How you fulfill them … the opportunity might be there and if it is then you should take advantage of it,” said the 76-year-old Cook.

It was a sunny and warm spring day in early May and Cook had his golf clubs sitting at the door. He was excited for his first round of the year. He hoped it was the first of many outings on area golf courses this summer.

Cook was born on his family trap line in Stanley Mission in northern Saskatchewan. Following his education in residential schools, Cook became a journeyman welder and worked for Westank Willock in Regina for 13 years.

It was during his time in Regina when Cook explored his passion for golf. He has enjoyed the sport for nearly 40 years and routinely scores between 90-100.

“It’s a fun sport … You can’t depend on anyone other than yourself. It’s your own ability as a golfer against the course you’re playing on.”

In addition to golf, Cook hopes to spend time fishing on the lakes in northern Saskatchewan.

In the meantime, Cook is enjoying the peace and quiet on his acreage near Spruce Home, approximately 20 kilometres north of Prince Albert. He said he’s independent from others and doesn’t have many neighbours close by.

Though he is a short drive from the city, which he visits frequently for medical checkups to care for his diabetes and mild arthritis.

Many of the tools from his days as a welder still occupy shelves in his garage should he feel the urge to take on any home improvement projects.

His options for the future appear plentiful. Plus, he still draws satisfaction from seeing young, aspiring business owners pursue their goals.

“Making entrepreneurs out of people who have a plan for their lives,” Cook said, when asked what he enjoys most about his role with SIEF. “Someone that wants to carry on their own life their way and needs a little bit of assistance to help set up their dreams and goals.”

“It’s a great organization and it’s there to help out entrepreneurs that have a plan of their own. If you’re healthy and given an opportunity, you can make it in this world and contribute to it.”

In fact, much of Cook’s life has been dedicated to helping others. He served as Lac La Ronge Indian Band Chief for 26 years. During that time, he led an initiative to improve basic water and sewer infrastructure in homes.

As his community’s leader, he advocated for his membership and ensured the band’s directors operated their programs effectively and efficiently. During this time, the LLRIB became known for its economic development initiatives, which Cook lists as one of his proudest achievements.

His work was recognized by the University of Saskatchewan in 2018. Cook was the recipient of an honourary law degree, the highest honour the U of S can bestow, to acknowledge worth and unique contributions that people have made in their communities.

Even in retirement, Cook still finds a way to help others. Cook built an insulated doghouse for his dog, who lives with him on the acreage, along with an enclosed dog run for exercise.

“He’s a spoiled dog,” Cook said. “He got leftover pizza and chunks of steak for breakfast today. He’s living a pretty good life.”

And so is Cook.

“I’m trying to be as healthy as I can,” he said. “I’m just going day to day. Hopefully things will open up a bit more so we can visit the parks and maybe get out on the lake and do a bit of fishing and more golfing.”