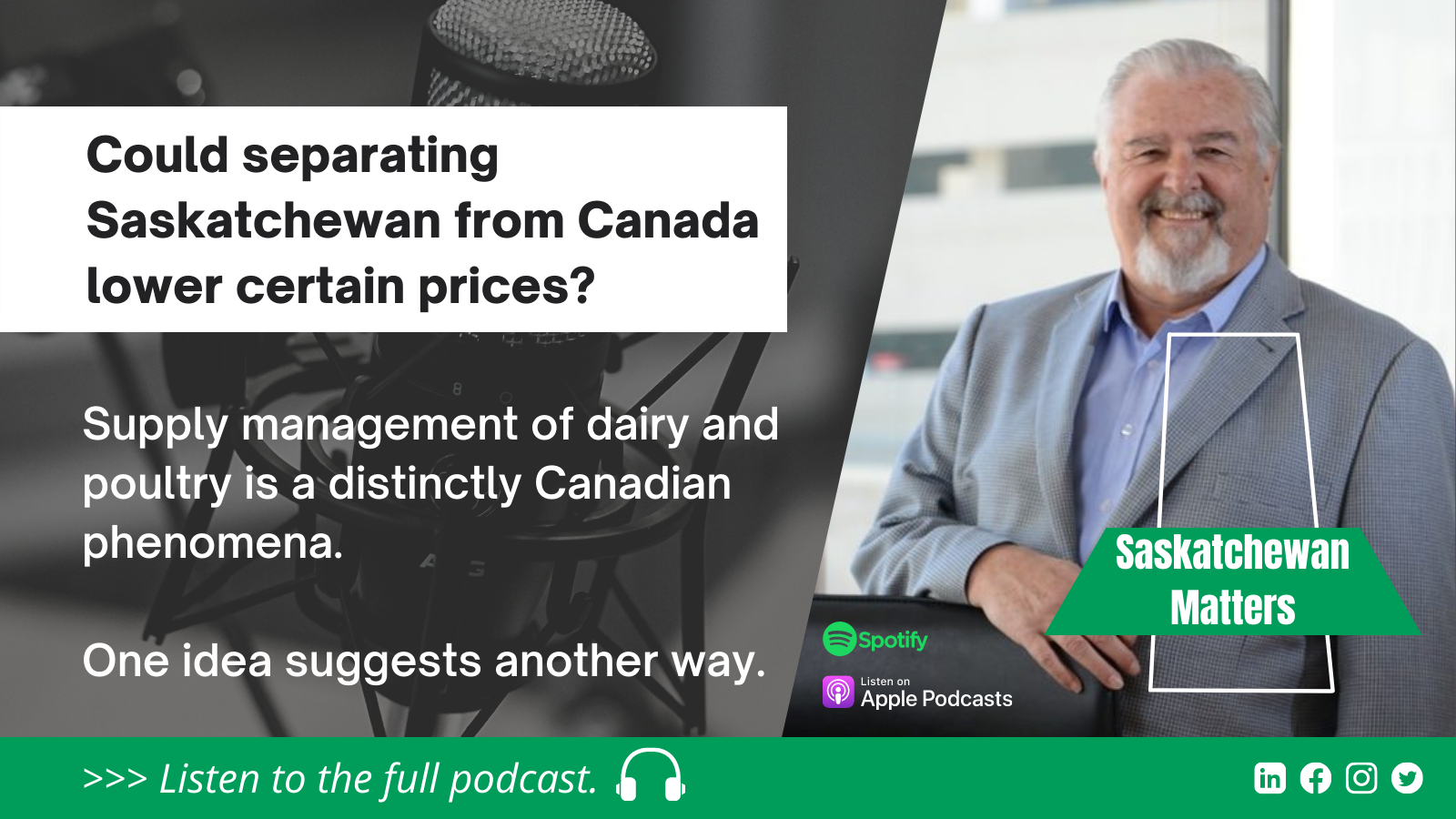 Separating from the rest of Canada might be a good idea for Saskatchewan for a specific purpose – to benefit dairy and poultry producers looking for a larger market and for Canadians wanting lower prices for food products from those producers.

There are many paying close attention to the prices they pay for groceries as inflation becomes more apparent to Canadian households. Those costs on top of housing prices – especially in Vancouver and Toronto markets – have more and more people thinking about their household expenses.

A recent article in Agriweek, a newsletter serving Canada’s agribusiness community for more than 40 years, said Quebec dairy farmers is the Canadian group closest to being like Russian oligarchs.

When you understand how supply management applies to the dairy, egg and poultry industries in Canada, it begins to make more sense. In agriculture, supply management is a distinctly Canadian phenomena. It was implemented to protect producers in order to keep their industry viable.

In Canada’s supply management system, there are quotas. The federal government sets the prices for dairy, egg and poultry products. To set the price, the government receives input from farmers on their cost of production. The system ensures farmers are guaranteed they get that amount back plus a profit. This creates artificially inflated prices and is similar to the economic situation that created Russian oligarchs.

This has made it easy for producers to make money. Supply management in the dairy, egg and poultry industries has eliminated competition, disrupting the natural order typically seen in a capitalist economy. For example, what typically occurs in agricultural production is producers gravitate toward the lowest cost jurisdiction to operate and they become more efficient in order to minimize their costs. This allows them to keep their prices competitive because consumers purchasing their producers seek to minimize their costs.

In Canada, consumers have no choice what they pay for dairy, eggs and poultry products because competition is lacking. When compared to what U.S. consumers are paying, we are spending 30 per cent more than them on chicken, eggs, dairy, cheese and other such food items.

The federal government is talking out of both sides of its mouth on this issue. It says it is concerned about higher costs and wanting to protect consumers. But then, it is largely responsible for higher prices for these grocery items.

Making changes would negatively affect voters they rely on to remain in power. Even those in opposition don’t want to propose changing the system because it would put them at risk of alienating voters in too many Quebec and Ontario ridings.

If there was not a supply management system and its quotas, those land and feed costs would have to be factored in by producers and they would be incentivized to choose to base their farm somewhere with lower costs. Somewhere like Saskatchewan.

Look at where dairy and poultry production are based in the U.S. You don’t find it in New York and California. It is Wisconsin that is known for its dairy and cheese and Arkansas is where its poultry is produced.

The U.S. does not subscribe to Canada’s insistence on supply management and it becomes a factor in trade negotiations. Canada won’t allow lower-priced U.S. products into our market and the U.S. isn’t interested in Canada’s higher-priced ones. So, the size of the market for Canada’s products is limited to at home.

This could be an opportunity for Saskatchewan. Separate from Canada’s supply management system for these industries. Producers would be then be attracted to the natural advantages of this province — lower land and feed costs – and move their production.

But what about the market needed to sustain those industries? Saskatchewan is already known for exporting its agricultural products, so why not include these industries’ production? There might only be a little more than one million living here, but there are more than seven billion in the world.

Being outside of Canada’s supply-management system would mean Saskatchewan dairy, egg and poultry producers could have access to that global market. Visit grocery stores in China and see what countries products are filling the dairy sections – New Zealand primarily, but also Ireland. Hypothetically, why not Saskatchewan’s, too?

It is a matter that could finds its place in political discourse at the federal level. There are those in Canada who have an appetite for separation. They point directly at the ruling Liberals as their reason for this hunger and, depending on what part of Canada they are from, can point to the policies of either Pierre Trudeau or Justin Trudeau for why they want out. This idea of Western provinces like Saskatchewan separating out of this supply management system could be an opportunity for the Conservatives.