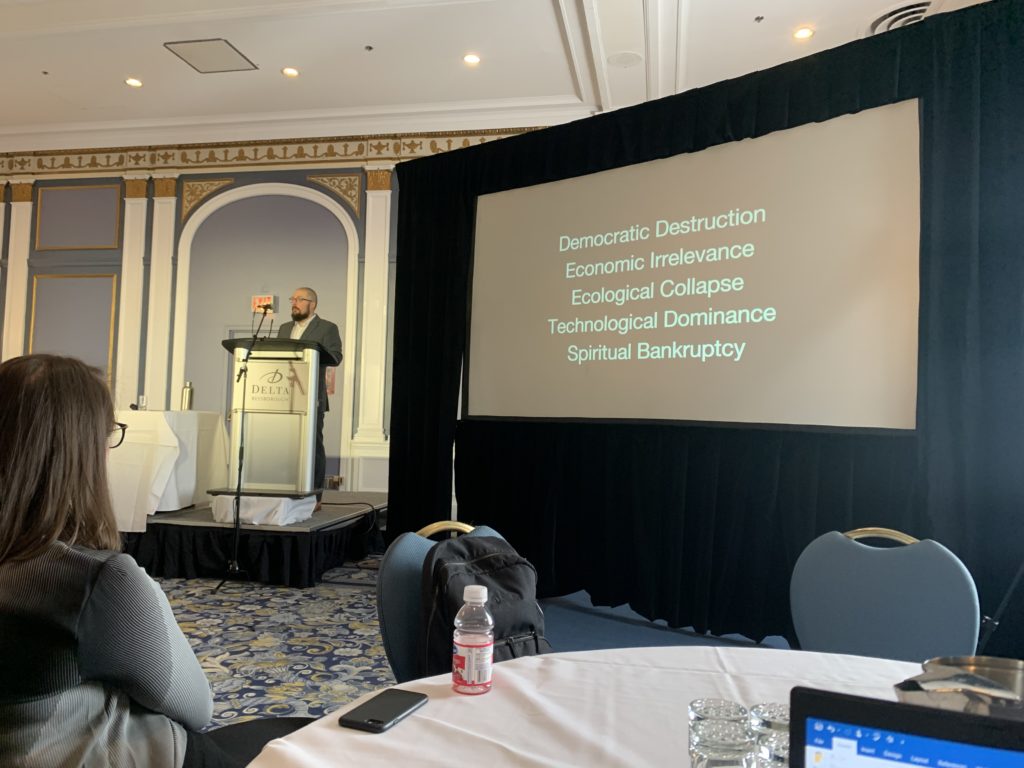 Jared Brock was the luncheon keynote speaker for the 2022 92nd Annual Meeting and Professional Development Sessions.

The author and film director has been considering many of these systems, including the global economic system,  education system, health-care system and others.

At the beginning of his presentation titled Surviving Tomorrow: Re-engineering Life in the Face of the Democratic, Ecological and Economic Breakdown, he said, with sarcasm, that those systems are all “perfect.” That is, they are perfect for their desired outcomes.

He then quoted Carl Jung. “If you cannot understand why someone did something, look at the consequences — and infer the motivation.” He suggested the same can be done for politics and culture.

Brock told the group that predicting the future is easy. Simply look at the current trajectory and assume nothing will change.

He shared that to create a globally connected society, we must have a common goal. The goal he proposed was to achieve widest-spread well-being over the longest possible term. Before proceeding, he said that the engineers and geoscientists listening could take or leave any or all of the ideas he was proposing.

He then described the five major threats he identified to achieving that goal and solutions for them. Those threats and solutions are:

Brock described Canada’s first-past-the-post system as a “caveman way of elections” that generates geographic favouritism and results in a majority of Canadians not being represented by those elected. He took issue with the Westminster model of parliamentary government saying it results in federal politicians not being accountable to voters. Instead, they respond to campaign backers and those who lobby them once in power.

He proposed a direct proportional democracy with active and informed citizens able to directly vote on issues rather than voting to elect representatives.

He pointed to two main drivers of economic irrelevance – automation and financialization.

He explained Henry Ford’s thinking. Ford knew that the cars he was manufacturing were too expensive for his workers. He decided he either had to build cars that were less expensive or pay workers so they could afford to buy his cars. Brock says today no one wants to create well-paid consumers to buy products.

Automation will worsen the situation. Millions of jobs will be eliminated by technology due to efficiency-driven capitalism driving specialization, making millions of humans economically irrelevant.

As for financialization, he said we are on the way to feudalism 2.0 because of “banksters,” plus leveraged financial investors, plus rent-seeking equals serfdom.

This equation, he says, is going to drive young Canadians to leave for other countries and discourage anyone else from immigrating here.

His solution is to ban rent seeking, which he described as companies providing goods for rent rather than ownership. He’d also like limits put on individual private wealth and property ownership and to index a national living wage to real inflation to ensure innovation and affordability.

Brock described why he believes today’s global civilization is not ecologically sustainable, describing soil nutrition, the extinction of species, microplastics in our water and air, and our warming planet.

He suggests population control through having fewer children rather than depending on technology to resolve this situation.

He described technology as an “invasive species” that captivates our attention and knows far more about each of us than we might realize. He is concerned about digital currency and how it could be used to track our financial transactions, suggesting it could lead to governments having the ability to delete currency and exclude individuals from participating in the economy.

He would like to see that no data is collected on any individual without them providing their express permission for that collection.

Finally, he is concerned about fragmentation in our global society because of individualism. He encouraged others to consider what freedom means, which he says has boundaries, such as truth, and why what we deem as freedom today is actually autonomy, which he described as the ability to do whatever you want whenever you want in whatever way you want. This, he said, leads to power, rather than truth, deciding who wins when people with opposing preferences collide.

His solution is a voluntary surrender of self to agree to pursue the goal he proposed – the widest-spread well-being over the longest possible term.

He concluded by saying that what he described are perhaps “terrible ideas,” but what got humanity to this point will not get us to where we need to go. That is what makes this an exciting time to be alive so that we can work together to create what is needed in order to survive tomorrow.