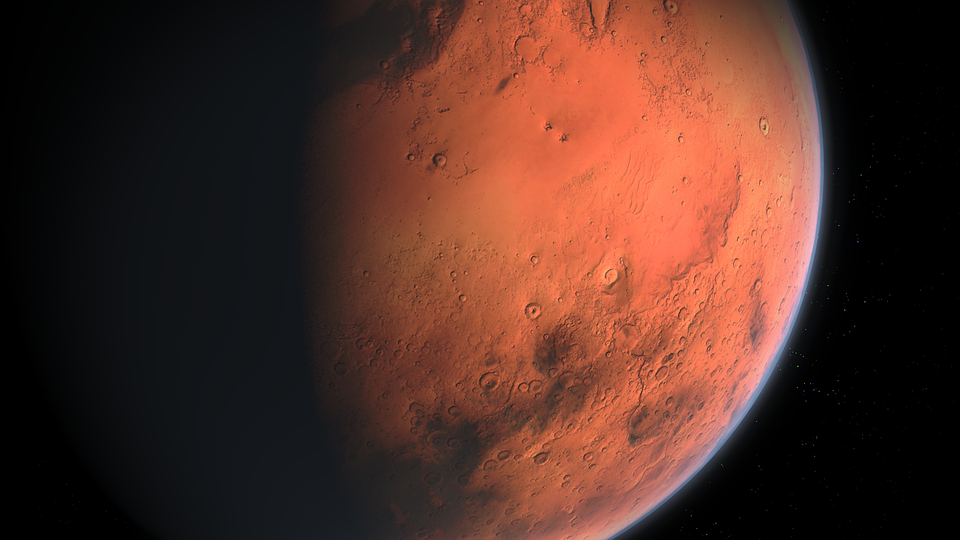 When most people think of engineers and geoscientists in space, they think of fictional characters like Star Trek’s Scotty. But a growing number of Earth-bound professionals today are hard at work getting humanity ready for the final frontier.

And now, for the first time, the spacecraft has detected deposits of glass inside craters on Mars. The discovery may have important implications in the search for ancient life on other planets. One crater of particular interest is Hargraves. It’s located in a region that once contained warm vents and was likely hospitable for life. Hargraves is being considered as a possible landing site for NASA’s Mars 2020 Rover. This news is fascinating to Erica Massey and other like-minded geologists.

Originally from the Kindersley area, Massey now lives just north of Kelowna where she obtained her undergraduate degree. During her studies there, she was awarded the opportunity to attend the University of Iceland through UBC’s Go Global exchange and study-abroad program.

Massey, who has since earned an M.Sc. through UBC and is a member of APEGBC, specialized her research to focus on glaciovolcanic geochemistry – ancient volcanic eruptions that occur beneath mountainous depths of ice and meltwater. Specifically, Massey set her sights on palagonite, a material formed from volcanic (molten) glass when lava interacts with water. Her thesis delves deeper into the textural relationships in glass and palagonite. “Whether glass is found on the seafloor or wherever, it’s a part of these deposits that have been erupted under large ice formations (up to two to three kilometres of ice during different ice ages) and made these deposits,” Massey explained. “Glass has a signature that it has cooled quickly. It’s on Mars, it’s on the moon, it’s on Earth. It also represents the magma that it was formed from. By analyzing the glass, we know what kind of composition of magma this was.” Ancient Earth could have supported early life, despite the intense volcanic activity. Massey’s findings help support this theory.

Observing the deposits on Mars – backed up with new evidence from the Orbiter – may indicate an environment that had life-supporting heat and surface water.

Because the Orbiter retrieves chemical composition and spectral imaging of the rocks and soil, the data that comes back is used to show the minerals that are in those rocks and soil.

This is of particular interest to geologists who also have learned that more than 1 000 kilometres of a southern ice cap on Mars is comprised of landscapes similar to glaciovolcanoes on Earth.

In addition, further research has shown that bits of plant life were preserved in impact glass on Earth when, millions of years ago, asteroids collided with Earth near what is now South America. Researchers are looking for similar deposits on Mars.

Massey predicted exploration of Mars and other planets within our solar system will continue to grow. In late October, NASA’s Juno probe delivered flyby images of Jupiter. Images revealed the detail of the planet’s thick cloud bands and powerful storms. In fact, some of the tempests are large enough to swallow Earth, or at least a good chunk of it. NASA also found that Jupiter’s atmosphere is a turbulent mixture of gas, particularly hydrogen and helium. Traces of molecules like ammonia, methane, sulphur and water also were found.

Looking beyond this solar system, scientists have discovered at least 1,000 exo-planets close to the size of Earth and with similar topography. The question is whether they are capable of supporting life.

Devon Island is the ideal place to train future space explorers – the valleys, canyons and gullies all over the desolate island, as well as the ground ice, are remarkably Mars-like.

The team studied lichens and geology and learned how astronauts could potentially live in harmony on the red planet. “Both of these sites are excellent planetary analogues,” Paul Sokoloff, a researcher at the Canadian Museum of Nature, told the CBC. “We thought it was a really great progression to be able to say, ‘OK, well, we know that these are both good Mars analogue sites,’ but we’ve never done the exact same scientific program at both.”

The group studied and compared how this Mars analogue site stacked up to findings on Earth, including biology, geology, crew morale and isolation over long term.

The lichens came into play because they’re a good way to practise studying simple biology. The group also looked at permafrost polygons, which are shapes on the tundra that may also exist on Mars.

All the while, the group monitored itself as well. They locked themselves in a metal container for approximately eight weeks – something they called a tuna can – to observe what it would be like for humans to travel to Mars.

Destination? A remote outpost on Devon Island in Baffin Bay, the largest uninhabited island in the world and also referred to as Mars on Earth.

The objective was to safely deliver the HMP Okarian, a concept pressurized rover undergoing rigorous training for Mars exploration.

At one point the vehicle went over a large fracture in the sea ice covered by snow and began falling backwards into the frigid ocean. Thanks to some quick thinking and a little luck, the crew managed to get the vehicle on land before it became submerged.

The team also weathered a 48-hour Arctic storm, an experience much like a violent dust storm on Mars. In the end, the team broke the record for the longest distance ever travelled on sea ice in a road vehicle.