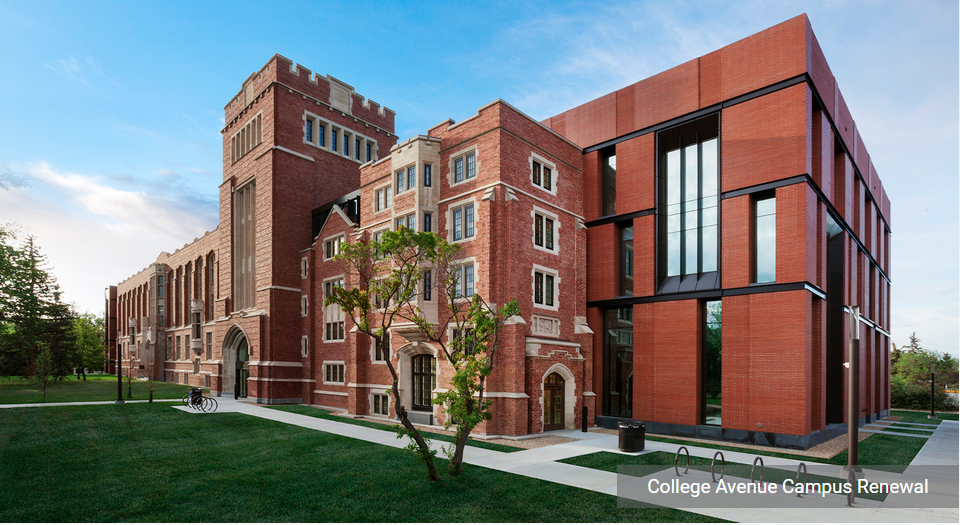 One hundred and eight years old never looked so youthful.

The University of Regina’s College Avenue campus recently experienced a $65-million facelift that involved demolishing existing structures, preserving others and erecting new buildings that are expected to have the same lasting effect.

The College Avenue campus is home to the University Centre for Continuing Education, the Lifelong Learning Centre, the Conservatory of Performing Arts and the Johnson Shoyama Graduate School of Public Policy.

Three structures in particular – the College Building and Tower and the Conservatory, – were the primary targets of this project. These buildings date back as far as 1912.

James Youck, principal architect at Regina’s P3Architecture Partnership (P3A), was the architect in charge of design for this challenging project. Difficult decisions had to be made when it came to knocking down historic buildings and constructing new ones. Heritage guidelines require the new construction to be something that is subservient and sympathetic but does not overwhelm the existing structure.

“It’s a matter of old technology versus new technology,” Youck explained. “Marrying those two approaches took a lot of time and effort to understand how we could design a system that would allow us to have an energy-efficient building but still permit the existing building to perform the way it always had.”

The team began with an investigation of the existing structures on site, including a 3-D scan of the building envelopes. They were able to track every stone and brick within a couple millimetres to get a better understanding of what the condition of the exterior envelope was.

Adding to the complexity of the project was the fact some of the buildings were interconnected. For example, the College Building and Tower Building attached to the Conservatory Building.

As these structures were constructed over different periods of time, there were significant technical issues, particularly with the Conservatory Building, where the south end was condemned and deemed unsafe.

The Conservatory was therefore demolished because the settlement of its foundations was exerting additional loads on the College Building which was threatening to topple the Tower.

“We salvaged a lot of bricks from that building and when we were doing the demolition of it and when the exterior brick was removed, you could see what was happening to the backup masonry,” Youck recalled. “It was what looked to be a ladder crack on the outside – the building had separated by four to six inches and the whole south end of the building was in danger of coming down.”

Youck said they wanted to maintain the character of the original College Building by retaining the heritage College Avenue facade. The colour of the new building matches one of the bricks shades on the old structure. They used just one colour so the addition can be clearly differentiated by its geometry, its colour and its patterning.

“It was like cutting a cake,” he said. “We removed everything behind the main façade, but kept all of the masonry in place. We pulled the windows out and braced the building while the new building was constructed behind it.”

The teams worked extensively with a heritage consultant, the university and the Wascana Centre Authority (now Provincial Capital Commission) to determine what type of expression in a new addition was appropriate to stand next to a heritage building. Youck said they had to follow national guidelines for preservation and restoration to historic places and ensure they didn’t mimic the existing heritage architecture.

“Masonry was going to play a big role in the design and we wanted to make sure the architecture was clearly differentiated from the heritage buildings,” Youck said. “We took design cues from the existing collegiate gothic buildings and one of those cues was the colour and proportion of the brick. We looked for a masonry product that would blend in, but the architecture and the expression of it would look different such that you knew there had been an addition to the building.”

“We weren’t trying to expropriate the heritage buildings of their quality to make the new building fit in.”

“The only way we could do that was to take the masonry product and apply it as a brick veneer in the new construction. It’s a cavity wall construction – there is a backup wall that is supporting a brick veneer with an air space and insulation.”

“It’s an extremely durable way of approaching a design – using all best practices in terms of what you need to do with a building envelope. The veneer, the fact it is brick, will last well past my lifespan and well into the future in the same way the existing heritage building has survived.”

Working with historic buildings, Youck said, presented challenges. However, it also provided educational opportunities when it came to studying and observing the existing structures. There was no shortage of surprises.

He said the technology used by architects and masons more than 100 years ago included a concrete frame infilled with a monolithic brick wall on the exterior. The interior partitions were a combination of hollow clay tiles and leftover bricks.

As they took apart the old building to begin the restoration process, they noticed differences with how masons approached their work. One interior wall would be made with hollow clay tiles and plaster. Another interior used leftover bricks and plaster. The next room would have a different wall construction entirely.

“Depending on which mason was working in which area, you see a different approach to putting the building together,” Youck said. “It all looks the same once the skin is on it, but there were subtle differences that we had to deal with.”

“Today, when we look at modern drawings and design, we would have produced 80 or 100 sheets of drawings for the restoration and construction,” he said. “The old building, they very much left it to the skilled tradesmen to put together the building. The architect would do a drawing showing what he wanted it to look like and the tradesmen and contractor would determine the best way to build it.”

Technology used today, obviously, is dramatically different compared to the limitations of lumber and stone used pre-World War. As well, there was a lot less information provided to the masons back then compared to today. Specification books weren’t available, the detailing was not as elaborate and the number of sheets of drawings were much simpler than today.

“Today, we still absolutely depend on the skill of the masons,” Youck said. “But as architects and designers, we’re providing more information around how the wall has to perform.”

That collaborative effort especially was needed on this project, as they worked to maintain a heritage and historic look while incorporating a modern approach.

Many of the archways, main corridors and windows, and interior finishes in the heritage buildings were preserved with protective treatments.

On the west side of the College Building, the new structure was modernized to include boardrooms, classrooms, washrooms, fire exit stairs and an area for building electrical utilities that service the original building as well as the addition.

Especially important was the repointing the College Building’s front brick and stone and restoring the front doors and windows.

This particular project isn’t unique to Saskatchewan. Other examples of restoring heritage buildings include Regina’s Viterra Inc. building on the corner of Victoria Avenue and Albert Street, Government House and many of the buildings on the University of Saskatchewan campus in Saskatoon.

“The addition, in a subtle and understated way but with beautiful detailing and craftsmanship, really shows a modern interpretation of a skillset that is hundreds or thousands of years old,” Youck said. “It’s not just brick. The addition has a granite base and there’s beautifully cut stone that was integrated into the addition in the same way the stonework was integrated into the original architecture. It’s a beautiful expression of that same skillset and that same timeless architecture that the original building was.”