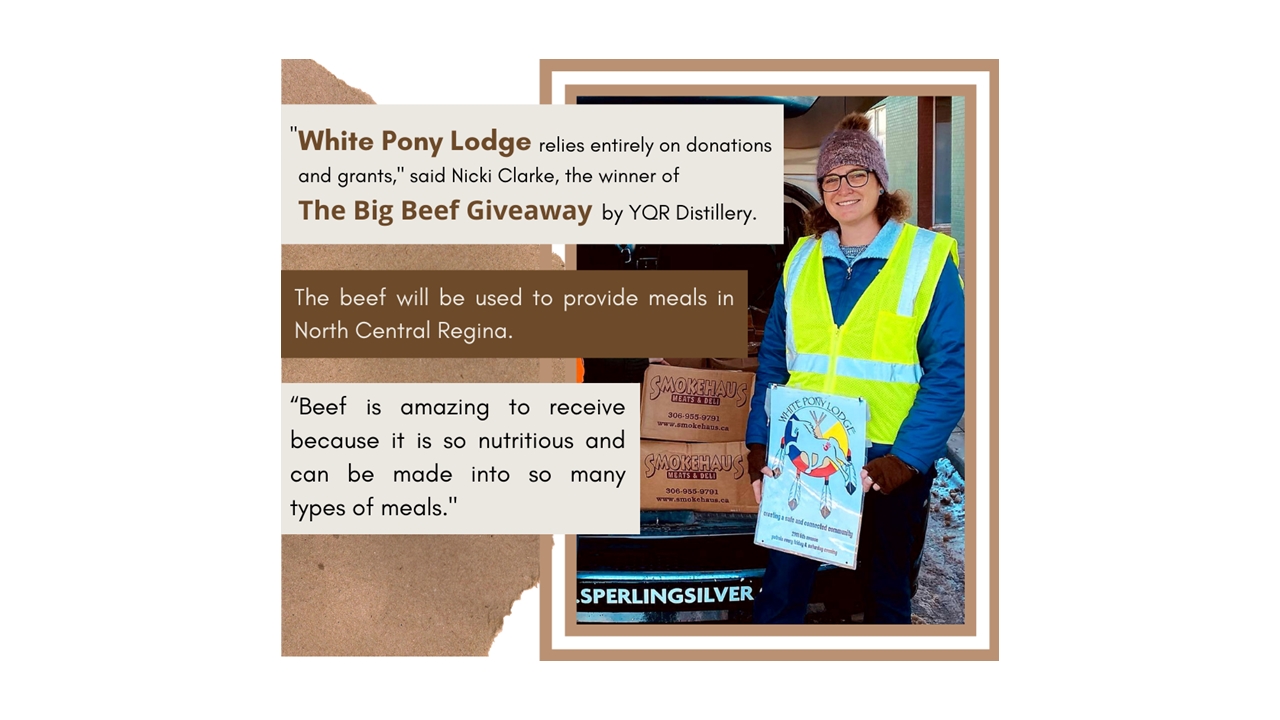 One cow can lead to a lot of connections, reminding Saskatchewan how getting people involved to benefit others can feed the good that exists in this province.

Plenty of good was distributed through a recent social media contest held by YQR Distillery. The Big Beef Giveaway supported and promoted two local businesses, benefitted two Regina charities and encouraged numerous passionate people to recommend those who could put some beef to good use, resulting in many meals that will nourish families and neighbours.

Connection and growth are central to YQR Distillery, which is led by Adam Sperling. His business is building important relationships in order to expand and contribute even more to the community. Caring about the details and being devoted to executing consistently produces excellence that benefits far more than those in his business. He has an eye on achieving big things in and for this province through this business, feeding into the growth of Saskatchewan and its reputation around the world.

“Without that community support, we don’t have a business.”

Providing beef to those in the community who could benefit from it was at the centre of the contest YQR Distillery developed. It purchased a cow from Lost River Beef, which was processed by The Smokehaus, an abattoir in Martensville. That business donated half of the cost of cutting and wrapping the beef for The Big Beef Giveaway.

One side of beef was donated by YQR Distillery to the Regina Food Bank, whose stated purpose is “neighbours feeding neighbours.” The organization aims to “feed hope”.

“We do this with food – the ultimate connector that brings people together,” the Regina Food Bank’s website states.

The Regina Food Bank will use its side of beef in a couple of ways. First, some of the meat will be processed into ground beef which can be packaged in one-pound portions and frozen. These portions will be distributed in hampers received by families.

Other cuts of beef will be used in the commercial kitchen of the Regina Food Bank and prepared meals will be distributed to community fridges and other organizations feeding people in the community.

“Not all who are food insecure access the Regina Food Bank, so a donation like is very helpful for us to make connections in the community to provide for them,” said Regina Food Bank CEO, John Bailey.

Getting the community involved

Encouraging people to share who else could make good use of some quality beef was how YQR Distillery decided to distribute the other side. The Big Beef Giveaway was to celebrate people going above and beyond for our community. Entrants in the contest were asked to comment on a social media post about the contest with the name of the person or people they wanted to nominate.  The winner and the one they nominated would split the remaining side of beef.

“White Pony Lodge to support the work they do through every season!” commented one entrant, Berni Yahyahkeekoot.

“Front line volunteers making a difference by connecting with the community of North Central.”

“They do a lot for the community of North Central, like helping supply meals. This would help them tremendously!” another entrant, Jen Frank, commented.

“These folks are out every week doing much needed connecting and caring.”

Meeting the need in the community

White Pony Lodge is a non-profit community-based organization that came about because of the #EndTheViolence campaign. The campaign began in response to more than 100 community members gathering in 2016 for a vigil for someone who died violently in North Central Regina. A shared desire to end needless violence in the neighbourhood spurred community members to take action.

Connection is the basis of their action. Prior to the pandemic being declared in early 2020, volunteers patrolled the community, checking in with those living in the neighbourhood to learn about their experiences and needs. During those patrols, they would pick up discarded drug paraphernalia. They would also distribute food and clothing.

More recently, the volunteers have been handing out meals from their location on 5th Avenue in Regina. A volunteer, Lynda, cooks the meals that go into containers that can be eaten outside or brought home to share with family.

Nicki Clarke was another entrant who nominated White Pony Lodge. As a board member and volunteer, she sees firsthand how it would benefit the neighbourhood.

“Those involved with White Pony Lodge do not judge. They accept people and provide help to them,” said Clarke.

The organization relies entirely on donations and grants to survive. A donation like this provides them much needed resources to continue their work providing meals.

“Beef is amazing to receive because it is so nutritious and can be made into so many types of meals,” said Clarke.

It was her nomination that was chosen in a draw as the winner. As the winner, she received one-quarter of the beef and the other one-quarter was donated to White Pony Lodge.

When the beef was delivered in late November, the YQR Distillery team and those at White Pony Lodge documented the donation and shared it on social media to let their followers know the good news.

“Our head chef Lynda is looking forward to filling bellies with some hearty meals this winter!!” the White Pony Lodge post reads in part.

“So glad you were winners!! Warms my heart to think of all the tummies that will be filled!!,” Lynn Macdonald commented on that post by White Pony Lodge.

Bringing together the good in Saskatchewan

By providing this meat through The Big Beef Giveaway, YQR Distillery has grown the good in the province.

The two charities who received the beef – the Regina Food Bank and White Pony Lodge — will further grow connections in the community. By distributing this beef to become meals, they will be bringing together families and neighbours together in support of one another through food.