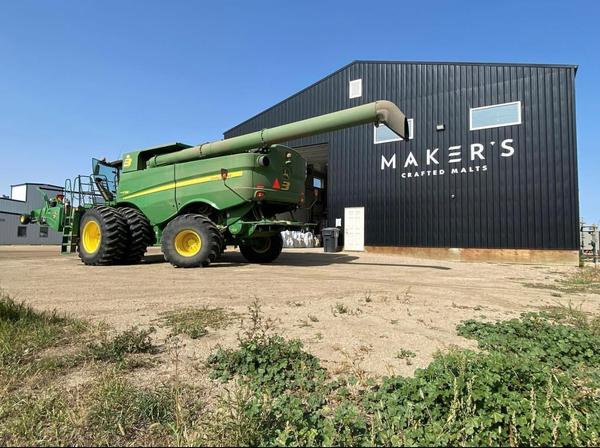 Matt Enns had a hunch that craft brewing, and distilling would soon become big business in Saskatchewan.

The foreshadowing happened, of all places, in Florida while visiting family. Enns caught a glimpse of the craft brewing world and immersed himself in the local craft brewing community in the Sunshine State and learned some intricacies of how the supply and demand chain functioned.

“I just got the sense that this sort of thing was going to come our way sooner than later,” Enns said. “This wave was going to come … and our family has this legacy of growing premium barley. Maybe there’s an opportunity there.”

Enns is a third-generation barley farmer. His family works in unison with three other barley farmers in an area known as the Saskatchewan Valley north of Saskatoon and stretches west toward North Battleford.

This area is one of the best in the world for malt barley growing.

With barley used as a primary ingredient in beer and whisky, Enns was bang-on with his prediction.

Three years ago, Maker’s Malt formed. It is a collection of four farming families with decades of experience growing high-quality malt barley.

Not only did they share Enns’ vision, but they also saw a disconnect between the needs of the local craft brewers and distillers and how they sourced their malt supply.

Saskatchewan is home to more than a dozen craft brewing and distillery companies, including Lucky Bastard Distillers in Saskatoon. The barley grown by Maker’s Malt is the primary ingredient in Lucky Bastard’s malt whisky.

The partnership between Lucky Bastard and Maker’s Malt is one that formed to benefit both companies.

“We’re a relatively new company and we knew that companies like Lucky Bastard and Last Mountain Distillery existed, but we didn’t really know how they go about producing their product and what they use for raw ingredients,” Enns said.

“As long as someone is interested, you’d think you’d have a foot in the door,” Enns said. “And (Lucky Bastard) were interested.

They were the first distiller to take our craft barley and put it into their whisky barrel.”

Lucky Bastard may have been the first local craft distiller, but it certainly is not the only one using supply from Maker’s Malt. They now supply four local distillers and a handful of companies out of province as well.

“We’re maxed out on production right now,” Enns said. “We’re having the conversation now about possible expansion. We’re only three years old, so were still pretty young for a small company.”

“But by next summer, are we going to be able to keep up to demand? What is our strategy for moving forward? I think expansion makes the most sense.”