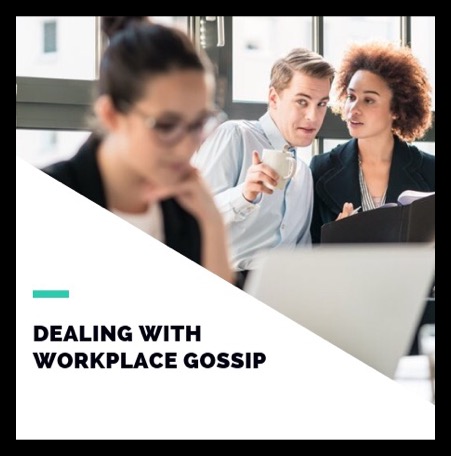 Imagine this. You are returning from a coffee run for several team members in your office, and when you return to your desk, some of those team members are talking about whether or not you’re going to be fired for a recent project that didn’t go too well. When they realize you’re back in the office, the conversation quickly dies, and the group breaks apart. For the rest of the day, nobody mentions anything about the conversation to you, until someone finally brings the rumour to your attention. Does this situation sound familiar?

Whether or not the rumour is true, that is the kind of workplace gossip that is incredibly destructive to workplace morale and team chemistry. Gossip consists of casual conversation, generally ungrounded in facts, about other people, who almost always aren’t around to her it. While it can be fun to partake in, there are almost no benefits of workplace gossip, and the consequences of engaging in it, or allowing your team members to do so, can be catastrophic.

The above scenario is just one of the many examples of situations where workplace gossip can drive a wedge between team members and management. Below, we will look at several other scenarios, and how to best deal with them.

You are the Target

This is usually the most frustrating gossip situation to be involved with. Having your personal life drawn into the workplace, or having your career become a conversation point behind your back, is incredibly distracting, and can cause you to despise those responsible. If you find yourself as the subject of gossip, it’s important to consider why that might be. While gossiping is almost always wrong, some people use it as a way to retaliate against your bad behaviour. First see if there’s anything you can correct, but if you feel like it’s totally unwarranted, it’s best to speak openly and candidly with colleagues, to find the source of the gossip. This direct approach will result in the least distraction, and help you retain the respect of colleagues.

Someone Else is the Target

When someone else on your team or in your office is the target of gossip, the best thing you can do is offer your support to them in their difficult times. You can lend an ear when they want to discuss it, help them inform your boss or manager about the situation, or even help them root out the source of the gossip. By being an ally to the victims of gossip, you can help mitigate some of the damage that workplace gossip can do in your office.

Your Boss is the Gossip

When your boss or manager is the source of the gossip, the situation can be much more delicate. The power dynamics involved create a much more awkward situation, because your role in the organization could be in the balance because of the weight behind managerial gossip. Even if your boss is the one gossiping, the way to handle it is still the direct approach. Be open with your boss, tell them about the damage the gossip is doing in the office, and if this doesn’t work, talking to upper management is always on the table. Using your intuition based on your specific situation is key here, but there’s nothing impossible about dealing with a gossiping boss.

You are the Manager Responding to Gossip

As a manager dealing with gossip, one of the most important things to do is to acknowledge it as legitimate. Enabling gossip or dismissing it as childish playground behaviour, suggests to your team that you don’t care about toxicity in the workplace. Listening openly and honestly to all concerns brought to you, and helping to mediate disputes between team members, is how to earn your stripes as a leader or manager. A well handled gossip situation can actually galvanize your team, showing your ability to lead through a difficult situation.