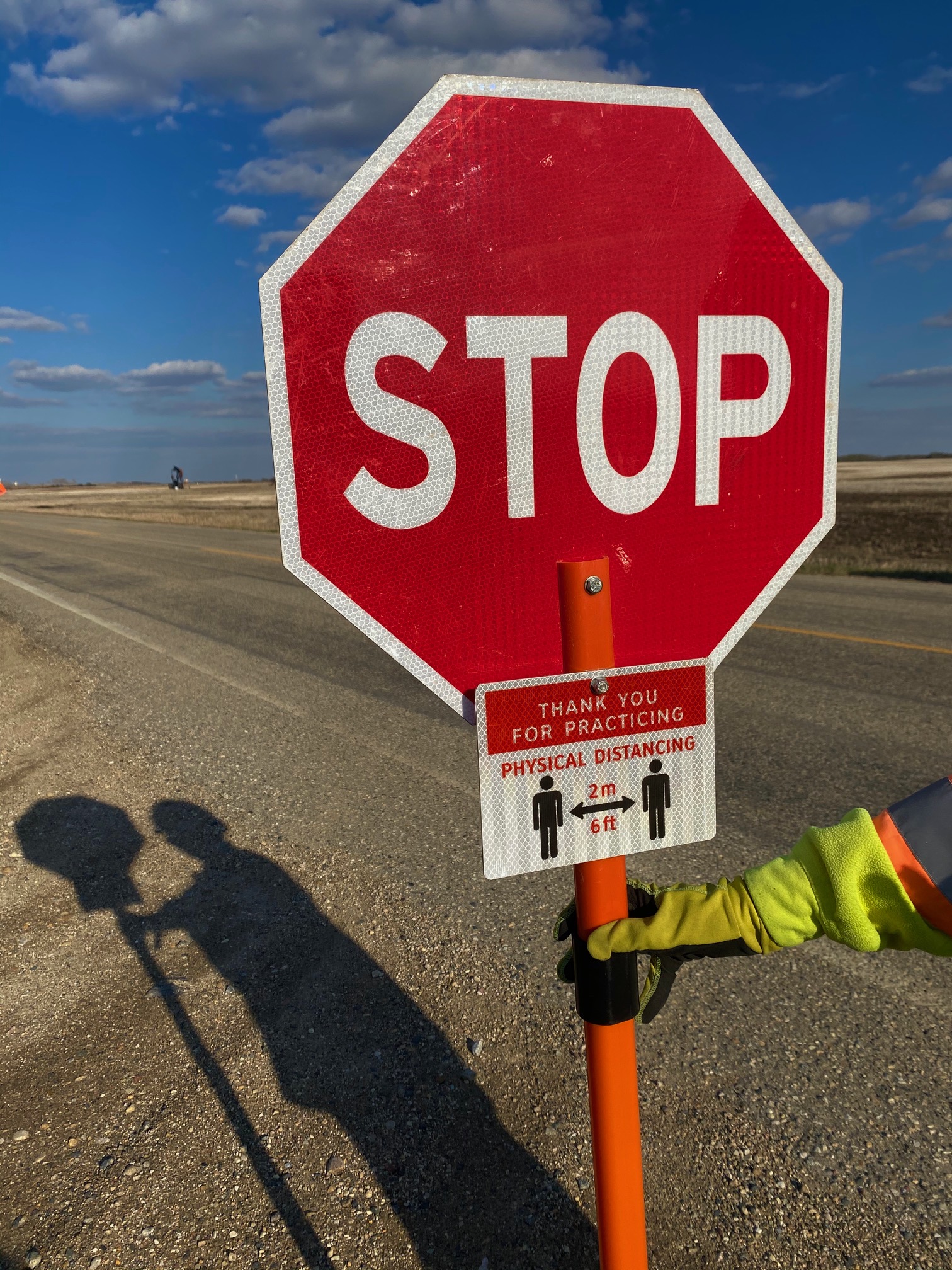 The COVID-19 pandemic has altered traditional means of doing business, for those who are fortunate enough to still go to work.

Some have embraced technology to find efficiencies and smarter ways of working. Others have been creative and found unconventional ways of functioning all while adhering to new health and safety guidelines.

Allan Barilla of Morsky Construction never imagined installing shower curtains inside company vehicles. But in the age of physical distancing, the temporary dividers make it possible to travel safely to and from job sites.

“Some companies are renting or buying more vehicles and just having one person per vehicle,” Barilla said. “We couldn’t afford to have 25 extra vehicles here. I’m not sure how many people could afford that. This is one way of doing things that works and it’s safe.”

Working with a crew of 25 on a stretch of highway near Indian Head, Barilla said each person on the site is screened at the start and conclusion of each work day.

As well, each person on site has an N-95 facemask, hand sanitizer and surface cleaner with them and in their vehicles.

“We’re doing a lot of extra cleaning on our own equipment and trucks and we’re typically six feet apart or more when working,” Barilla said. “And there’s a more administrative paperwork that needs to be done as well.”

That’s where Allan Goldstone, safety director with the Heavy Construction Safety Association of Saskatchewan, comes into play. He and his safety training staff normally train approximately 2,000 people during the winter months.

This year, however, has been different thanks to the coronavirus.

“In the 20-plus years I have been with the Safety Association, I’ve never seen it as busy than what is was during that first month of COVID-19,” Goldstone said. “With all of the new rules and regulations that were being introduced, contractors didn’t have anything in place that met those requirements. No one did.”

So, instead of teaching and auditing, Goldstone and his team created documents and templates for contractors to corroborate health checks for daily and weekly toolbox meetings.

Barilla said they document everything from where their crew has been, where they stop for gas and use a restroom.

“We’re hoping this is only temporary, but we’re planning to stick with this routine for at least the entire season this year,” he said. “When our guys go home, they are told to stay home unless they have to go out for the necessities or for groceries.

Public spaces like restaurants and bars re-opened in early June after they had been closed for several weeks. This forced Barilla’s crew to make minor adjustments for meals when working remotely.

He said rural restaurants were starving for business, so they stayed open and provided take-out meals for lunch and supper for Barilla’s crew. Eating on the job site rather than indoors at a restaurant was a slight change of routine.

Goldstone said safety training during the summer months, which they’re doing this year, is rare. But it’s the reality they’re face with during these times of alternative measures.

A big reason why training sessions are still being conducted into June is because class sizes have been significantly reduced in order to meet proper physical distancing.

Classrooms shrunk from holding between 20 to 30 students to eight at maximum. As a result, what would normally take one day of training is now three days of training.

“Unless we’re renting a ballroom, we’re going to be stuck with training eight people at a time because of social distancing guidelines,” he said. “Either we rent a bigger space to do the bigger classes, which is going to add costs for our association, or we stay with the classroom we already have and we’re already paying for and hold smaller classes.”

The actual training has been altered as well. Goldstone said they are limited to the training they can do because some classes are hands-on.

Where in-person training has been limited, technology has expanded. Webinars, for the first time, were introduced into safety training classrooms.

Flag person training normally was conducted through in-class teaching. However, in the Fall 2019 it was added online.

“One thing this pandemic has taught us is that we should be looking at all the course material that we have and trying to decide what can actually go online,” Goldstone said. “This has forced us to embrace technology.

“We’ve never used a Zoom platform before. We had Microsoft Teams, but we’ve never really used it. It has helped us immensely because we’re still able to communicate and collaborate as an association when we’re working on a template.”

Whether these new measures are temporary or become the new normal remains to be seen. Both Barilla and Gladstone and other contractors are taking the wait-and-see approach. Nonetheless, these alternative means of doing business certainly are better than no business.

“We’ve been doing this for just over a month now and this has kind of become our new norm,” Barilla added. “We don’t even think about it anymore. We just do it. Habits have changed a little.”