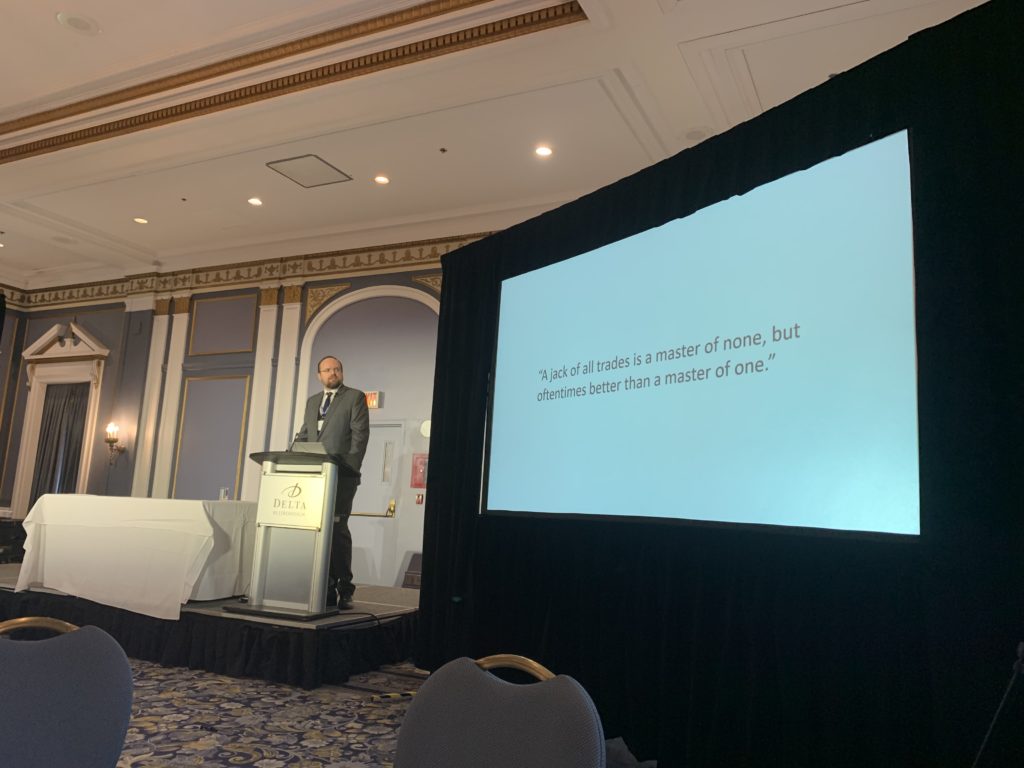 Dr. Adam McIness was the breakfast plenary speaker at the 2022 Annual Meeting and Professional Development Conference

Space technology as well as organ and tissue regeneration may not seem to have much in common, but they do have a person in common –  Dr. Adam McIness.

McIness is a University of Saskatchewan PhD researcher who was awarded a Vanier Scholarship in 2019 to develop scaffolds made of proteins that will promote tissue growth in order to 3D print artificial organs for transplantation.

Those gathered for the Annual Meeting and Professional Development Conference breakfast plenary went on a journey with McIness during his presentation, Interdisciplinary and Experiential Learning Opportunities with Engineering, during which he invited engineers and geoscientists to consider the benefits of interprofessionalism.

McIness opened with a quote.

What he described of his experiences as a medical student who is now earning a PhD in biomedical engineering illustrated the value he attributes to being a jack of all trades.

He explained how in medical school at the University of Saskatchewan, the importance of interprofessionalism in patient care was stressed. Having several different types of professionals being trained at the same university and learning to collaborate was beneficial, but he thought this collaboration could go further to include law and engineering to achieve even greater results.

McIness explained how he broadened his experiences and skills by joining various student organizations. For example, he joined the University of Saskatchewan Space Design Team (USST) as a medical student, which was a first for the group. While most on the team were engineers, who had impressive theoretical knowledge, McIness brought his years of experience in manufacturing and manual labour from his year before attending university. That experience came in handy during a competition in which the team built and demonstrated a lunar excavator for NASA. Its members needed to think on their feet to address equipment and climate challenges. Finding solutions quickly allowed the team to remain competitive.

The value of collaboration, competition and connections between professions was carried forward to another initiative that McIness founded. He is a leader of MedHack(+), a non-profit organization that organizes hackathons that bring together students, health-care professionals, business leaders and technologists to solve problems in health care.

Bringing together these groups creates an opportunity for those who can develop technology to learn about problems being experienced by health-care professionals and for them to collaborate to devise a solution. Those in business can see what practical solutions the marketplace needs filled and provide financial backing for those solutions to become a reality.

For example, a family physician described the issue of collecting health history information from patients using paper forms. Two students collaborated with the physician to develop an app that would collect the relevant information needed by physicians and translate that patient-supplied data into medical terminology to create a patient record, saving physicians time and effort during their busy days of back-to-back appointments. A sponsor of the event was present to watch this collaboration and is interested in bringing this app to the marketplace.

It was his experience in Mozambique as a medical student that got McIness thinking about the capstone projects by fourth-year engineering students. Physicians in that country rely on very basic technology to diagnose and treat patients. Then, there are economic development needs in that nation to which engineers could contribute.

He would like to see more engineering students gain clinical experience so they understand what happens in medicine in order to better know what medicine can accomplish for patients. Few schools in North America offer the opportunity to develop a combination of the skills and knowledge of each profession, but McIness found a couple.

McIness himself is combining engineering and medicine in his research into tissue regeneration. His interest was sparked when he was 14 when he saw an image of the Vacanti mouse. It was a lab mouse which appeared to have a human ear growing on its back as a proof of concept that cells could be seeded onto scaffolds to regenerate organs.

He is now working on a PhD in biomedical engineering at the University of Saskatchewan. His research involved using a type of 3D printer to create scaffolds and constructs for tissue-engineering experiments. He described the process of turning pig bladders into a “homogenous solution of proteins” which he can use to create the scaffolding. Another natural material he is working with is silk.

McIness describes himself as an “aspiring polymath” or someone who has knowledge in multiple disciplines to creatively solve problems. He is interested in this, not only for himself, but for others. In addition to founding MedHack(+) as well as contributing to the USST creating the Canadian International Rover Challenge, he is seeking to create even more opportunities. For example, he’d like to create a program for astronaut cadets, which would be similar to Air Cadets, except young people would be encouraged to develop skills related to space travel and, unlike Air Cadets, they would become accredited for those skills.

The 2022 Annual Meeting and Professional Development Conference was a hybrid event. All events welcomed people in person with virtual attendance available for the annual meeting, the professional development sessions and the awards banquet.